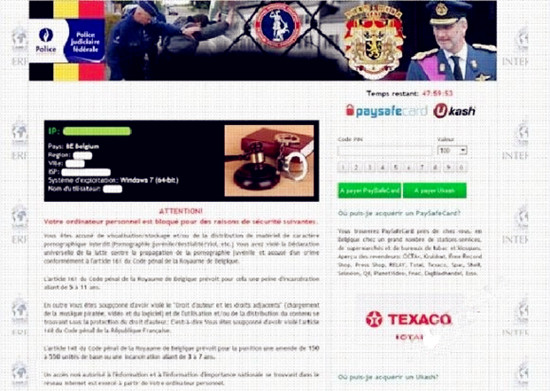 Note: The best to alter from further damages produced by Police Judiciaire Fédérale virus is to clean it out from the victimized machine immediately. If you can address it, you can ask for help by Live Chat with VilmaTech Online Experts now.

How to Remove Police Judiciaire Fédérale Virus from the Infectious Machine

Police Judiciaire Fédérale virus can completely locks Windows and stops users from reaching to the desktop. To unlock locked page, you have to boot the infectious machine with safe mode with networking. Read on please.

1. Totally shut down the infected computer.
2. Find out F8 key on the keyboard from the infectious computer’s keyboard. If the keyboard doesn’t work, you may plug in an external wired one to have a try again.
3. Press Power button to reboot Windows, but before Windows launches you have to hit F8 key to reveal out Windows Advanced Options.
4. On the Windows Advanced Option interface, where reads Safe Modes options. Now highlight Safe mode with networking there.

1. Start and login the infected computer until the Police Judiciaire Fédérale virus screen shows on.
2. Press the Ctrl+ Alt+ Del key.
3. On the Switch user interface, tap the “Shift” key on the keyboard by your left hand, click on “Shut down” button. Click on Restart option.
4. It may bring you to the ‘Choose an Option’ screen, you need select “Troubleshoot.”

2. Navigate below path from the Registry Editor window. You then need to find out “Shell” and right click on it. Click on Modify.
3. The default value data is Explorer.exe If you see something else written in this window, remove it and type in Explorer.exe.

Note: Mustn’t leave such Police Judiciaire Fédérale virus and Android malware unfixed on the infectious machine, otherwise you have to face incredible damages. Till now, if you can’t get the police virus cleaned out completely, you can live chat with VilmaTech 24/7 Online Experts