Being bullied by the UKash Android virus, PC users in the United Kingdom have experienced a great disturbance of being forcibly locked up. Cyber crooks make this network crime of kidnapping Internet user’s computer and Android phone, brazenly asking for a bogus fine which is absolutely not a small amount. Most of the victims can not see through the truth, and so afraid of being associated with the law since being solemnly charged by the supposititious judiciary organs. Imagining to withdraw the litigation and rescue the lock-up PC, most of the innocent users choose to honestly pay the money in accordance with the requirements, committing serious mistakes. Actually, users should remove the UKash Android virus quickly instead of following its requirements. The following content is going to show a few typical cases of the UKash scam happened in the UK, hoping to help the PC users to further know about the virus and beware of being deceived in the future. 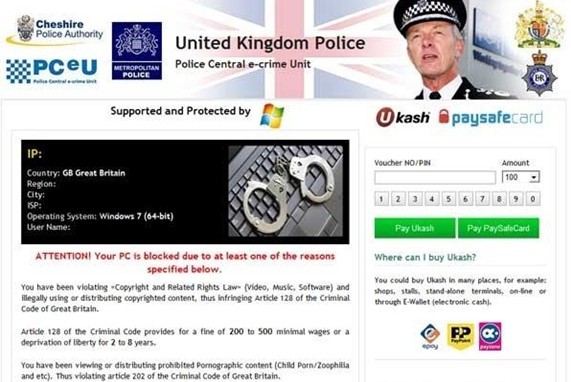 United Kingdom Police Virus has been considered as the most representative UKash virus in this appalling series of cyber scam. Arguably, with the most compelling banner of United Kingdom Police just like the picture shows, the ransomware suddenly locked up the targeted PC in the UK without scruple. With the highest but counterfeit authority, the virus has spread widely and caused the innocent Internet users sufferings. The lock-up warning message indiscriminately charged the victims for violating the copyright and related rights law. As a punishment, the “lawbreaker” have to pay a fine of £100 via the UKask or Paysafecard prepayment system, which is definitely an illegal ransom. Because there are a number of different versions related to the United Kingdom Police Virus, so there might be a lot of users has been lost more than £100. However, in either case, it is definitely not what we want to encounter this tricky UKash scam virus and get lost a sum of money. And what’s more unacceptable and intolerable is humiliated to distribute illegal copyright content which is associated with individual morality and we should resolutely resist the false accusation. 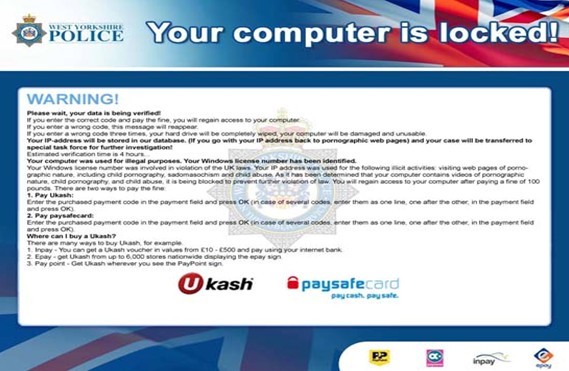 The same type of UKash ransom named West Yorkshire Police also attracted quite a commotion in the north of the England. With the help of the reputation and force of the territorial police, this cunning UKash virus successfully captured the innocent PC users and achieved the fraud. Using a specific and precise name of a real county, the West Yorkshire Police virus was clearly aiming at the targeted victims mainly located in the area of Bradford, Calderdale, Kirkless, Leeds and Wakefield. But soon, the virus infection has gradually spread to the other regions. West Yorkshire Police UKash ransomware use the old trick to firmly lock up user’s computer and ask for 100 Euro as a ransom which is so unreasonable. The longer the computer was locked, the more anxious the user would get. Worrying about the uncontrolled might be attacked by any kind of threats, most of the users were forced to pay the money in the specified way just as it required. The UKash virus still added highly colored details to this lock-up by intimidating the ignorant users that there are some datum in their PC system having been verified to related to illegal purpose. Apparently, the West Yorkshire Police just coaxed the victims and made them to pay the bogus fine as soon as possible.

Being considered as one classic variant of the United Kingdom Police Virus, the Cheshire Police Authority Virus(CPA virus) just shows up, and successfully making the PC users follow the same old disastrous road again. With the evil intention to victimized the PC users who are mostly gathered in the north west of the England and some in the Wales. As the United Kingdom Police UKash Virus was a great success in the history, so the CPA ransomware easily get its way and makes exorbitant profits. Just because the cunning lock-up virus has clearly displayed the specific information such as location and IP address of the targeted PC, accused them of illegally using or distributing copyright content. The innocent users would get scared of having extra trouble even they already knew that they are not breaking any law. In this way, the masses of users would willingly paid the fine of £100, hoping to unlock the computer and be absolved from the virtual crime as early as possible. However, the lock-up situation is still not going to change whether the fine was already paid or not. 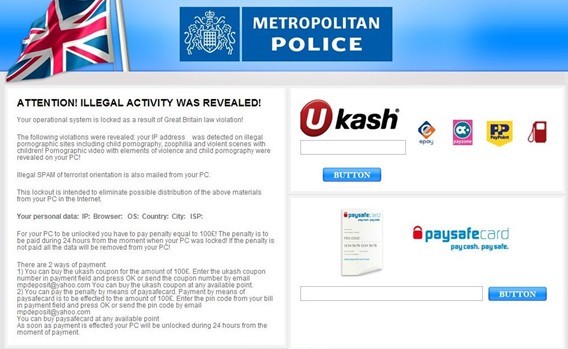 Metropolitan British Police virus also has directed a successful scam, leaving a deep and shocking impression to the Internet users in Greater London. Just using the same routine as mentioned above, the MBP UKash virus forcibly locked the infected computer up with the unreasonable excuse of slandering the innocent users of violating the law. Then, the vicious MBP virus would take advantage of this opportunity to threaten the victims, claiming that a fine of £100 must been paid via the UKash or Paysafecard system, otherwise, all the data in the PC system will be completely removed. Have to point out that whatever the Metropolitan British Police UKash ransomware said is just a bluff. Even so, the majority of the PC users couldn’t hold it for too long and finally chose to handover the money, that is also why the lock-up scam is getting more and more rampant. And the worst thing is that the cyber criminals can easily transfer the money via the UKash or the Paysafecard without traces. In this way, even when the victims of MBP virus finally realized the truth and called the police, it still makes no difference to the matter.

Now the UKash Android virus of United Kingdom is not a particular news for the masses of Internet users, but it is still necessary to pay attention on it continuously so as to avoid Android security issues effectively. Even more and more cyber fraud have been exposed to the public, there still so many ignorant PC users are under threats. Because the cyber criminals won’t give up on victimizing the users that easily. There will definitely be plenty of variants of UKash ransomware showing up soon. Although we have now learned some effective solutions to against the cunning PC lock-up virus, it is still not enough to completely resist all the virus attacks. Even so, PC users don’t have to worry too much about the network security in the future, as all the PC experts will devote themselves to working on finding the most desirable method to deal with the UKash virus and the other similar ones. PC users have to hang there with hope, and never be so vulnerable and let the tricky virus get its way.