Internet Security Pro is not a real kind of PC security software but actually is commonly supposed to be virus which attempts to attack Windows PC. Internet Security is published by cyber criminals and they claim that the program is designed to protect PC from virus infections however, it is designed to cheat money from PC users in reality. Internet Security virus will automatically launch when you login into Windows and pretend to perform a scan, analyze your PC system. A few of minutes later, this virus will display a fake PC threat analysis report to make you believe that your PC has been infected by malware, viruses, Trojan and other PC threats. Moreover, Internet Security virus also will list a great number of files that it categorize as suspicious high risky files. Internet Security Pro scares Windows users that they must remove the “infections” and high risky files immediately otherwise they would get system crashes and other problems such as losing of important documents, divulging of online bank account. Most of the victims have been fooled by the Internet Security virus and they choose to believe their computers are getting numerous infections which detect out by this software.However, when they try to remove the so call malware, viruses, or any risky files listed by the Internet Security Pro, they would be asked to purchase a license of full version of the program before they proceed the removal function. 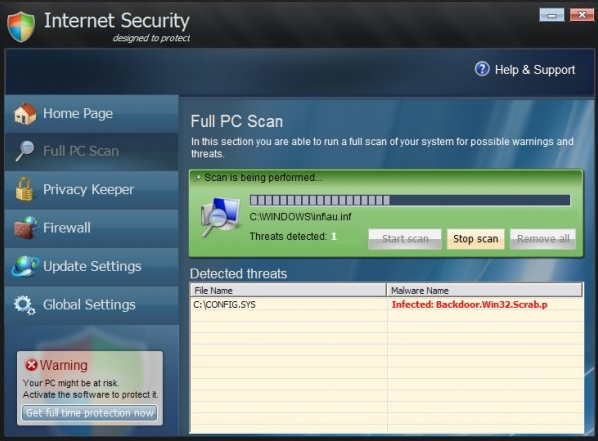 Victims who installed Internet Security Pro should realize that there are no any virus infections hidden on the PC but only the Internet Security virus itself. The main purpose of releasing such kind of program is to earn money by maliciously scaring their customers. VilmaTech PC Threats Research Lab has enough evidence to prove that every report from Internet Security Pro is totally fake. It generates a same analysis report under even a new fresh Windows system and some of the risky files are not exist at all. The worse thing is that when users trying to pay the money they will probably loss their personal financial information. PC users will not re-gain a cleaned computer even though they pay the money and remove the “infections” because every thing is illusion Warning message will keep popping up every time users login into Windows and launch the Internet Security Pro.

Internet Security virus can do many a things on your computer more than what you might think. It will disabled the Windows system utilities, including the Windows Task Manager and Registry Editor, and will block you from running certain programs that could lead to its removal. Beside that, this rogue PC security software has also modified your Windows files associations, and now whenever you are trying to open a program, Internet Security 2013 virus will block this operation and display a bogus notification in which will report that the file is infected.

Internet Security is a scam, and you should ignore any alerts that this malicious software might generate. VilmaTech Threat Lab devote themselves to analyze the latest PC threat research and viruses removal instructions. Follow and finish steps as below, Internet Security virus can be removed from your infected computer completely.

If you are using Windows 8, press the Windows key + C, and then click Settings. Click Power, hold down Shift on your keyboard and click Restart, then click on Troubleshoot and select Advanced options. In the Advanced Options screen, select Startup Settings, then click on Restart.

Windows will now boot into safe mode with networking and prompt you to login as a user. Please login as the same user you were previously logged in with in the normal Windows mode. Then proceed with the rest of the steps.

Step Three: Click on Processes tab. Find the process by the name of random.exe. Then scroll the list to find required processes. Select it with your mouse or arrow keys on the keyboard and click on End Process button.
Step Four: Click “Start” menu — “Control Panel”. Search out the “Folder Options” and show hidden files in this area. 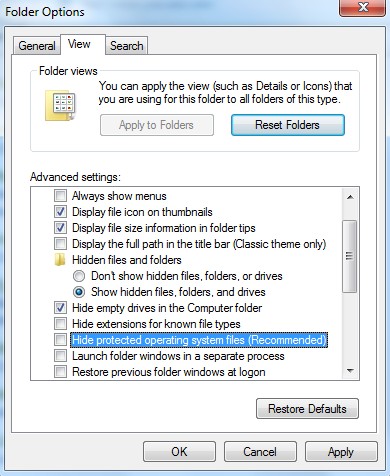 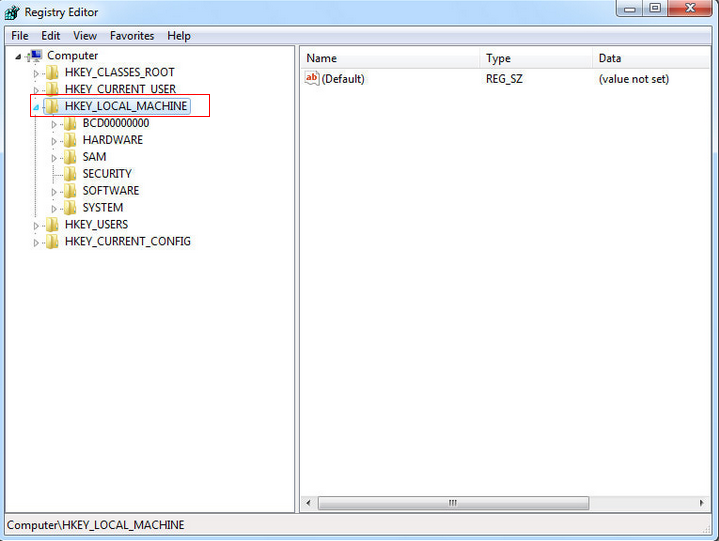 The above mentioned registry ensures that, the virus registers itself with the compromised system and executes itself upon every boot.

If you are not confident of deleting the malicious registry keys and files hidden in the Windows system folder, or if you have any questions or doubt at any point, STOP and ask for VilmaTech assistance. VilmaTech online support will have real-time chat with you and give you some professional suggestion.