Dllhost.exe, How to Fix High CPU Consumption by Dllhost Process 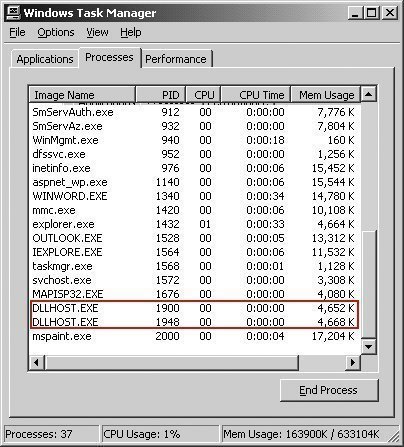 Dllhost.exe, Windows background process as it is, is not as familiar to PC users as svchost.exe, people start to post questions and suspicions on dllhost.exe and some even consider it is a virus due to the following scenarios occur to be accompanied by dllhost.exe running process:

Instinctively, people would run into these scenarios resort help from security utilities. However, from the feedbacks collected by VilmaTech Online Support from forums and clients, it has been verified that such programs (latest version and updates installed) haven’t found out computer threats and that optimizers fail in ending dllhost.exe process that considerably consumes memory.

So such questions like “what dllhost.exe is”, “why dllhost.exe consumes much CPU”, “is dllhost.exe a virus” and “how to end dllhost.exe process” may come to your mind and you can’t stop thinking. This article is hereby written to give answers and solution altogether. Should you run into additional problems that are not listed down in this article, you are welcome to consult VilmaTech online technician by starting a live chat window here.

As its name suggests, dllhost.exe is applied in managing DLL so that the operating system becomes capable of coordinate build-in controls, drivers, software and hardware appropriately and the OS becomes stronger in resisting virulent infiltration equipped with timely update. It can now be told that dllhost.exe plays an important role in normal operation and it is one of the components of Windows OS. Generally speaking, dllhost.exe occupies 3664k.

Reasons for High Consumption by Dllhost.exe and Its Damages

Though dllhost.exe manages dll operation, it is not usually caught running in Task Manager. In fact, dllhost.exe only appears when COM+ assembly program is activated. Therefore, dllhost.exe can also be considered as COM agent to run Web and FTP server under Windows. Besides, dllhost.exe owns the capability of coordinating dll operation, some attackers have put their eyes on it for malicious affection. So roughly there are two reasons to incur dllhost.exe problem.

Reason NO. 1:
MDAC loads Microsoft ACCESS(es) that corrupt(s) when reading and writing. ASP thread becomes blocked thereafter. Other threads have to do nothing but wait, leading to IIS deadlock. Therefore, all CPU is spent on dllhost.

Feature:
CPU stays 100% and never comes down until the restart of IIS service. However, CPU spikes to 100% again a little while after the restart.

Reason NO. 2:
Some program didn’t close Database after establishing an object. CPU will be consumed more to server day by day.

Reason NO. 3:
Infections, worm particularly, replicate themselves in a large number to occupy plenty of computer resource or affect exchange server to keep anti-virus busy, leading to highly consumed CPU.

Reason NO. 4:
Problems happen to thumbnail previews because of some bug that has been found on some dll file of certain program. It is good habit to update installed patches, drivers and the like. However, it is not recommended to install an object that has not been fully tested as bug can be found and malfunction would happen.

There are different reasons to cause dllhost.exe error or issues. People should not assume merely that any sudden appearance in large numbers of running process is caused by virus affection. To fix the high CPU consumption by dllhost.exe, one should apply solution accordingly; otherwise, one will fail in decreasing the usage with persistent issues. Below are the instructions to show how to reduce CPU consumption by dllhost.exe running process according to the reasons stated in the preceding paragraphs respectively. On the occurrence of difficulty in figuring out the reason to cause dllhost.exe problem, please feel free to contact VilmaTech specialized professor for technical analysis by starting a live chat here.

How to Fix High CPU Consumption by Dllhost.exe Process

Situation One – IIS deadlock results in high consumption by dllhost.exe.
(tip: such procedure needs patience and carefulness so as to find out guilty files one by one.)

Step1. enable “Find deadlock module” to set “wblock” as “yes” and set file directory, d:\test for example, and “logblock.htm” will be generated under log catalogue.

Step2. restart IIS thereafter, ACCESS file that’s loaded in the end will be recorded in “logblock.htm”.

Step3. check the last 10 ACCESS files (“**COUNT.MDB” and the like) recorded in “logblock.htm” if CPU rises high again.

Step4. move counter files that you suspect to be culprit to Dustbin temporary.

Step1. hold and press Win key and R key at once to bring up Run box.

Step1. record the flagged directory of the detected infection.

Step2. show hidden file and folder and remove any folders named after the virus name in the detected directory.

Step4. browse to C:\Windows\System32 to remove any suspicious items.

Step1. restore to the previous version of the file you just updated right prior to the occurrence of dllhost.exe problem.

Step2. delete the file that causes computer freeze temporary in the middle of the download.

Step3. disable thumbnail preview, which is not recommended as disable it would result in invisible movie and other media files.

It should also come to your knowledge that additional vicious items hold a chance to worm into the target machine through backdoor/vulnerability caused by the virus that utilizes dllhost.exe running process, which would put more difficulties in resolving dllhost.exe problems and removing the infection. More energy and professional techniques should be employed for thorough and complete fix.

As we all know from the preceding paragraphs that there are various reasons to give rise to high CPU consumption by dllhost.exe. Therefore, it is wild and wooly to consider that multiple dllhost.exe running in the background is caused by virus affection. Ending dllhost.exe running process may relive CPU usage for a while but it is not recommended by VilmaTech Online Support since real-time monitoring by security utility or ASP analysis by IIS requires such process for normal operation. More potential damages can be lurking.

Strong Statement
This article is hereby written by VilmaTech Online Support to inform wide range of PC users of the functions, reasons, damages of dllhost.exe and offer efficient solutions to high CPU consumption by dllhost.exe according to causes accordingly. VilmaTech should not be mistakenly considered to be in association with the spread or endorsement of virus that exploits dllhost.exe. Should you have difficulty in resolving dllhost.exe problems, you are welcome to get specialized technical help by starting live chat.