Windows Defence Master is not a legitimate security program, which generally appears to users in the form of a fake Windows warning on a targeted computer that it infects, purportedly claiming that a specific number of PC threats existed on compromised machine that should be terminated imminently. From the aspects of technology, Windows Defence Master can be categorized as a form of Internet fraud tool or Rogue security software utilized by scammers, as it always attempts to mislead users into purchasing its bogus full licensed version in order for the simulated removal of detected malware. The common measure Windows Defence Master used to increase its authenticity is to imitate basic operating principle and GUI (Graphical User Interface) from standard antivirus software, which has made a good impression for users. When initialized, this type of rogue virus will render installed security application inoperable for the sake of protect itself from auto removal. 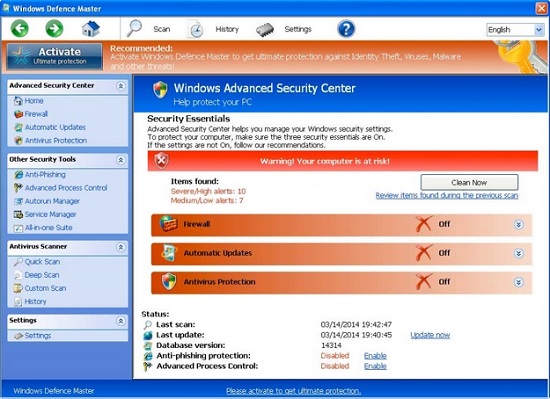 Upon its complete installation, Windows Defence Master may immediately infiltrate into kernel system by technically implanting its malevolent codes and files. This may directly lead to the modification in default system configuration, including Master Boot Record (MBR), which takes control of the operating system bootloader and the storage device’s partition table. Thereupon, Windows Defence Master threat could be loaded up and executed automatically whenever Windows is launched. While running in affected computer, Windows Defence Master may significantly reduce the overall PC performance speed by taking up high computing resources. Similar as the Activeris Antimalware Rogue-AV infection, Windows Defence Master threat may make use of found system security vulnerabilities so that to open a backdoor for remote hackers. If this is the case, this type of rogue virus may be utilized by hackers to drop additional threats on compromised machine for further harm, and obtain unauthorized access to corrupted system. As a result, to safeguard affected computer as well as user’s privacy, it is urgent to get rid of Windows Defence Master as long as being informed of its existence.

Note: The following manual removal requires certain computer expertise. If you cannot handle the operation alone and do no want to make mistake, you’d better live chat with VilmaTech Certified 24/7 Online Experts to help you remove the virus manually without mistake.

How does Windows Defence Master Enter Your PC

How to Remove Windows Defence Master Step by Step

Please be aware that manual removal is only suggested for advanced users, as it is related to parts of kernel system. Any single mistake may lead to worse results. If you are not familiar with the process, you’d better back up Windows registry first in case of incautious mistake, or you may ask help from VilmaTech 24/7 Online Experts to avoid any mistake and remove the virus completely.

*Video Guide on How to Backup Windows Registry in Windows 8

Method for Windows 7, XP and Vista:

3. In the opened Search box, type msconfig in it and Enter.

4. Next, click on msconfig icon from the search results.

6. Check the box for Safe Boot and choose Network option below. It will offer Internet services for you in safe mode.

8. Later, Windows will boot into Sade Mode with Networking automatically.

1. End up the process of Windows Defence Master by opening Windows Task Manager.

2. Get rid of the files related to Windows Defence Master.

3. Clean up all the registry entries of Windows Defence Master.

Why Should I Remove Windows Defence Master

Please be aware that manual removal is a high-level process that is required for certain tech skills. If you cannot deal with the operation alone, it is recommended to ask help from the VilmaTech 24/7 Online Experts to resolve your problem completely.