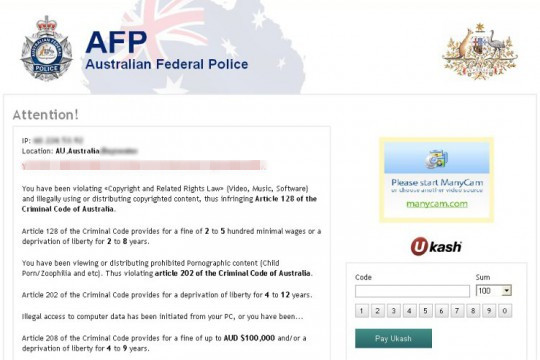 AFP Virus is designed by those cyber criminals who aims at the wicked profits from innocent Android devices users. They trickily makes up a series of scams to push victims access the pitfall step by step. In the first place, AFP Virus will lock targeted Android devices suddenly without any notification. It would be so cunning to lock the screen, which will stop users from any setting and action to remove it by existing anti-virus application at the time. Not far behind, the blocked screen display a pop-up warning. As mentioned above, the warning is in the name of Australian Federal Police, with official slogan, logo and diction. Those innocent victims have not gotten right from the shock who would be attacked by this warning again. What’s more, victims are accused of many illegal actions, like the breach of copyright, the use of unauthorized or prohibited apps and watching child porn videos. Of course, those charges are faked up by evil designers to frighten people to trust their lie. It is advisable for people whose Android devices are infected by AFP Virus to let alone these fake warning. The first priority after being infected, is to find ways to remove AFP Virus from devices. If there is any trouble in the progress, people can have live chat with our VilmaTech experts to ask for some professional help.

Why experts suggest that people should remove AFP Virus from Android devices immediately. So many people take some time to see the notification but cannot make out the scam and lose more. After the fake warning, criminals still prepare a bigger pitfall for Android devices users. It is a notification of fine. It is reported that people should be pay the fine as required within a short count down deadline. Worse still, AFP Virus claims that if people will not pay the fine or without the deadline, the blocked phone will not be recovered any more. Maybe the last fake tip or the whole scam gives a large pressure, then lots of people pay that fine. Except to find that it is an additional financial loss, it is not any practical means which is helpful for the infected Android phone. Another one reason that people should act immediately to make Australian Federal Police Virus removal, is that AFP Virus maybe keep insert other virus or Trojan into the locked devices. It is to say, when the screen is locked, the personal information is risky of exposure and the whole device are in a high risk of damage. Therefore, people should not waste any time to make out these lies but seize the time to recover the device in professional method.

Keep pressing “power off” several seconds until there is a confirmation to ask you if you want your device to reboot into “safe mode”.

Australian Federal Police Virus is a so treacherous virus which not only aim at Android devices but also causes many trouble to PC. There is an alert to people, no matter what is used to surf the Internet, to develop a good habit of surfing the Internet which is especially significant. Nowadays, the Internet have developed a lot, more and more criminals intend to make illegal profits from this large industry. They insert series of virus into unknown sources applications, unfamiliar advertisement links or email attachments and so on. What it calls for the cautiousness to use the Internet. To protect the devices or those private information, people should learn some easy tips for urgent issues. Or, VilmaTech experts are always here to provide the considerate and professional help. Feel free to have a live chat with our experts.