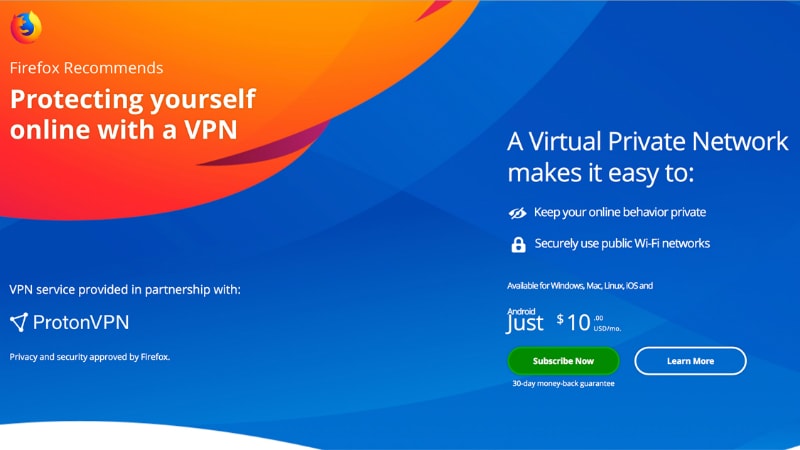 Mozilla has long played an important role in the online world, but the company still keeps exploring ways to ensure user’s safety beyond the browser’s reach. According to Mozilla, the company teamed up with ProtonVPN AG to start selling subscriptions to ProtonVPN through its Firefox browser. The cost is for $10 per month and the VPN is compatible with iOS, Android, Mac, Linux and Windows. Starting on October 24th, a small number of people in the US using the latest version of Firefox will see the offer pop up. Payment processing is handled by Mozilla (through Stripe or Recurly), and Mozilla will receive a small cut from each sale. It’s not clear if Firefox for Android will also receive the message.

With VPNs are widely used today to protect Internet privacy, the move that partnerships with ProtonVPN  is very important to Mozilla’s future. Mozilla evaluated a long list of VPN providers before deciding on ProtonVPN. Here is what they said in a blog post:”We examined each vendors’ privacy and data retention policies to ensure they logged as little user data as possible. And we considered numerous other factors, including local privacy laws, company track record, transparency, and quality of support. As a result of this evaluation we’ve selected ProtonVPN for this experiment.” ProtonVPN is a Switzerland based VPN with a strict privacy policy so it does not log any data about your usage of their service. Both parties are looking forward to this experiment. So let’s hope the partnership will help more people stay safe.